Nisan 10, Rapture of Firstfruits And Beginning of Tribulation 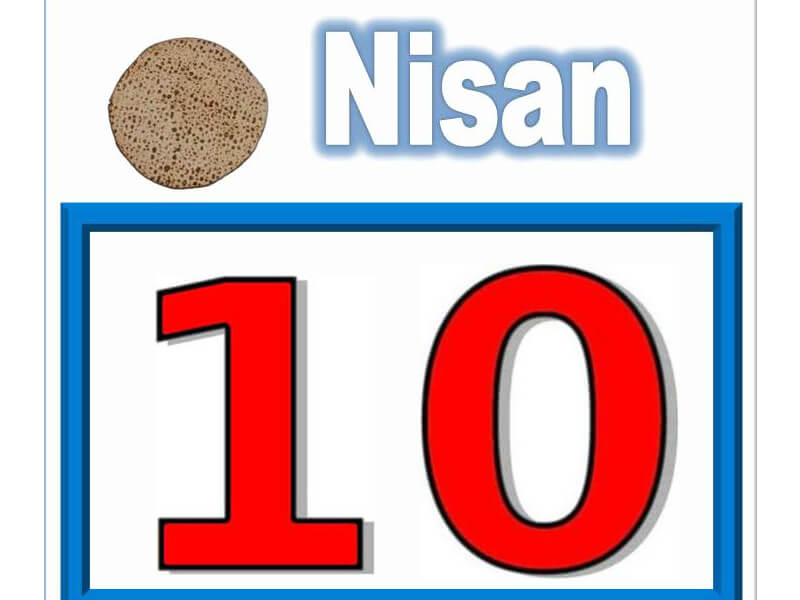 The total time of the Great Tribulation spoken of in Scripture is 1260 days. As we shared before, the 70th week of Daniel has already fulfilled in Jesus but will see a symbolic fulfillment as well. If you recognize the fact that the 7th Trumpet makes its final blast on the Day of Trumpets you should also be aware that the 1260 days of the Great Tribulation began on the 10th day of Nisan, 3 and 1/2 years earlier. What is the importance of the 10th day of Nisan?

In the 12th chapter of Exodus Yahweh instructed Moses that on the 10th day of the 1st month (Nisan) he was to take an unblemished male lamb of the 1st year and separate and watch over it for 4 days. On the 14th the lamb was to be sacrificed and its blood struck upon the side posts and upper door post of the house in which it would be eaten. That night, the 15th of Nisan, the Death Angel passed over the houses of the Israelites protected by the blood. Hence the “Passover.”

Jesus fulfilled the pattern of the “sacrificed lamb” in giving His life for each of us His children. Jesus entered Jerusalem on the 10th day of Nisan to acclamations of “Hosanna: Blessed is the King of Israel that cometh in the name of the Lord.” Hosanna has a Hebrew origin in the word “yasha” meaning “to be open, wide or free.” It is often translated “save now.” It could just as well be translated “free now.” In Psalm 118 you will see that context. Verse 14, “The Lord is my strength and my song, and is become my salvation (deliverance). Verse 19, “Open to me the gates of righteousness: I will go into them, and I will praise the Lord.” Verses 25,26, “Save (free) now, I beseech You, O Lord:….Blessed is he that comes in the name of the Lord….”

Jesus was crucified on the 14th of Nisan, as the lambs were being sacrificed for the Passover meal some hours later on the 15th. Jesus was taken down from the cross as the 14th day closed and was buried to rise again, the “firstfruit” from the dead on the 16th of Nisan. Luke 24:7 “Saying, The Son of man must be delivered into the hands of sinful men, and be crucified, and the third day rise again.”

The 10th of the first month also portrays in type the larger picture of Jesus’ work in each of our lives. As 1000 years are as a day unto the Lord so it was that Jesus, the unblemished sacrificed lamb was set apart for us 4 days or 4000 years previous to His incarnation and subsequent sacrifice. His being set apart as the Lamb of God was necessitated by the fall, the entrance of sin into the world, 4000 years B.C.

After 4 days (4000 years) Jesus gave His life for the sin of the world. 2 days or 2000 years years later there will be another Firstfruits rapture and that in the next few years.

The 10th of Nisan is a compelling date for the Firstfruits Rapture as a fulfillment of one of Scriptures most exciting patterns. After their servitude and bondage to Pharaoh, the Israelites, led by Moses, were set free to journey to God’s mountain, Mt. Sinai, and ultimately re-enter Canaan from whence they had come 430 years earlier. Because of their rebellion their journey was extended by 40 years of testing in the wilderness. Finally, on the 10th day of Nisan the Priests carrying the Ark of the Covenant stepped down into the swollen Jordan river. As they did the waters “rose up upon an heap”, that is the Jordan dried up allowing the people to cross over on dry land.

Each of us are or have been in bondage to Pharaoh (Satan) living in Egypt (Satan’s kingdom, the world). Moses, a type of Jesus, sets God’s people free, leading them towards the Kingdom of Heaven, the land of Canaan. After a symbolic 40 years of testing in the wilderness of this world we finally have the opportunity of “crossing over” into the Heavenly Kingdom, and that without touching or experiencing death (Jordan dried up). The Jordan River comes forth from high in the mountains of Lebanon feeding into the Sea of Galilee (the nations). From there it flows into the Dead Sea (Hell), the lowest place on earth. Jordan means “descender” and types “death.” Jesus was immersed in Jordan (death) that we need not die. He took death upon Himself that we might have life.

Rom. 6:4,23 Therefore we are buried with him by baptism into death: that like as Christ was raised up from the dead by the glory of the Father, even so we also should walk in newness of life. For the wages of sin is death; but the gift of God is eternal life through Jesus Christ our Lord.

Josh. 4:19 And the people came up out of Jordan on the tenth day of the first month, and encamped in Gilgal, in the east border of Jericho.

The word “high” is literally “on the top” or “upward.” Therefore Paul pressed “toward the mark” of the “upward calling.” In what ever year that call comes it will be on the 10th of the first month, the 10th of Nisan. 1260 days later is the Day of Trumpets when at the “last trump” first the dead in Christ shall rise then we who are alive at His coming shall go to meet Him in the air.

Will that call come this next year? It is not likely but if it does it will come on March 24/25, 2002, the 10th of Nisan. Will Jesus make that call at any other day of the year? It is our conviction that He will not. He will follow the pattern He has set forth. Similarly Jesus could not have been crucified on any other day than the 14th of Nisan, for He is the “Sacrificed Lamb.”

Presently we see the fulfillment of the 70th week in type as beginning on the astronomical Day of Trumpets. We would then be in a period of 3 and 1/2 years of preparation for the Great Tribulation. Jesus is giving each of us an opportunity to buy from Him “gold tried in the fire”, “white raiment” and “eyesalve.” (Rev. 3:14-22)

“….they received the word with all readiness of mind, and searched the scriptures daily, whether those things were so.” Acts 17:11